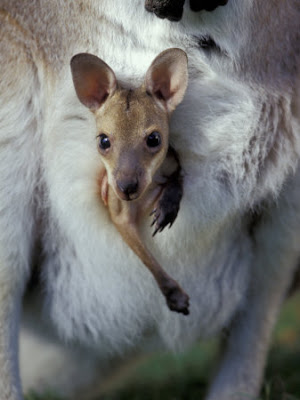 Do you know how kangaroos got their name? A myth goes that when European explorers first saw these strange hopping animals they asked a native aborigine what they were called. He replied "kangaroo" meaning "I don't understand" your question. The explorers thought this was the animal's name. And that's how the kangaroo got its name.
The young are born the size of a lima bean after a gestation of 31–36 days (this is equivalent to a human embryo at seven weeks old). Immediately after it is born, a joey finds its way to its mother's pouch to continue its second stage of development there. He will usually stay in the pouch for about nine months before starting to leave the pouch for small periods of time. It is usually fed by its mother until reaching 18 months. You have to show your kids this incredible video of a kangaroo giving birth and continuing its development inside his mother's pouch.


After watching this video, I almost wished humans gave birth the same painless way as kangaroos. And in case you think that only kangaroo babies live in their mother's pouches during infancy, you may be surprised to know that kangaroos are just one of a species of mammals called "marsupials" that carry their young in pouches through early infancy. Koalas, oppossums and the tasmanian devils are all examples of marsupial mammals that carry their young in distinctive pouches. 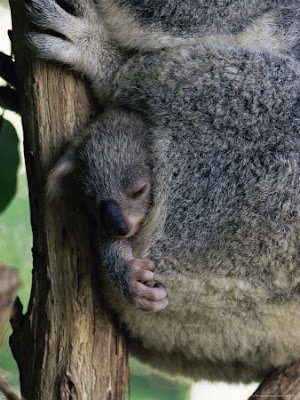 Like a newborn kangaroo that instinctively finds its way to mommy's pouch to continue its development right after birth, studies have shown that human babies can also benefit in their development from being carried in a pouch from birth. 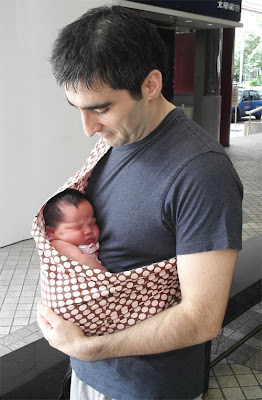 Many parents can testify that babies who are carried in a soft pouch carrier close to their bodies cry less, are more calm and content. They also seem to sleep more peacefully, nurse better, gain weight better and develop better. More about the benefits of a pouch which is often considered parenting's best kept secret can be found here! 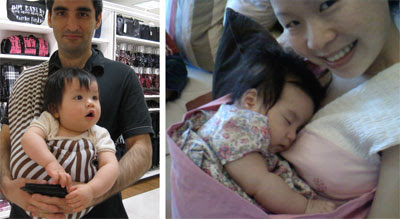 I guess we can now also add human beings as a evolved class of marsupial mammals?
Posted by laissezfaire at Saturday, October 17, 2009